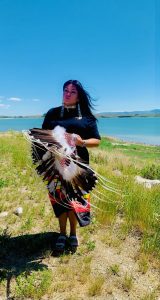 Lynnette Grey Bull has been an active advocate for Indian Country for over 10 years. Ms. Grey Bull is the Founder/Director of Not Our Native Daughters – an organization that focuses on the work and education of Human Trafficking and the Missing, Murdered Indigenous Women & Girls. Lynnette also serves on the Wyoming Governor’s Task Force for Missing, Murdered Indigenous Persons (MMIP), and the Wyoming Human Trafficking Task Force. Lynnette’s prior work was as Chair of the Arizona Commission of Indian Affairs at the Governor’s office in 2014 -2016. Ms. Grey Bull also advocates for diversity and inclusion of Native Americans, Indigenous preservation of land and water rights, child protection, cultural competency, environmental justice and voting rights. She is a former Trainer & Advisor Consultant for the DOJ AMBER Alert Program 2014-2017. Lynnette has worked as a Subject-Matter-Expert and Tribal Liaison from various research and documentary projects. In 2018, Ms. Grey Bull successfully led a team with the Wyoming Democratic Party; to campaign for Representative Andi Clifford (D-WY). Lynnette was selected to be the 2020 Wyoming Delegate for the DNC, and she also accepted the nomination of U.S. House of Representatives Candidate from the Wyoming Democratic Party. Although Representative Cheney held her seat; she was proud to be the first Native American to run for federal office in the state of Wyoming. Lynnette is dedicated to advancing democracy in Indian Country – she provided Congressional testimonies on The Tribal Heritage & Grizzly Bear Protection Act – May 2019, and Tribal Youth Suicide Prevention, in 2016 for the American Psychological Association on Capitol Hill. Not Our Native Daughters has educated over 7000 professionals, both in urban and tribal communities since 2010. Ms. Grey bull strives for the growth of a future where Native Americans prevail in all the same areas where other ethnicities succeed.